Marc Abrahams founded the Ig Nobel Prize ceremony in 1991 and since then has honoured research across the world that makes people LAUGH, then THINK. Every year, genuine Nobel Laureates introduce ten new Ig Nobel winners at Harvard University in the US.

He highlights that these are the types of research that people will remember the next day. It sticks in our head.

Over 10,000 nominations are made a year. Around 20% of these are self-nominated, and almost all of these are quickly rejected. The funniest pieces of research, are often done by those who don’t realise it and are in their eyes actually perfectly serious.

Marc recalls the 2003 winners for the Ig Nobel Prize for Physics on their research, “An Analysis of the Forces Required to Drag Sheep over Various Surfaces“. Their results? Downhill is the best way to drag sheep. When they received the congratulatory call for their Ig Nobel success, not a single one of them considered that their research could be amusing in that way!

Each annual prizewinner for the various categories are kept secret up until the Nobel Laureates open the winner envelopes. Whether you have won the Medicine prize for “using rollercoasters to try hasten the passage of kidney stones“, or the Economics prize for “investigating whether it is effective for employees to use Voodoo dolls to retaliate against abusive bosses“. Each winner gets time for their all-important glory acceptance speech (with their cheaply made trophies and trillion Zimbabwean dollar prize money).

However, they have to keep it interesting, short and sweet.

If they start to waffle and lose the interest of the audience (as researchers are often guilty of) a nominated little girl titled Miss Sweetie Poo, comes into action. If she deems that the winner’s speech is getting tedious or too long, they walk up to the podium and say:

This adorable chant will continue until the winner hurriedly wraps up their speech.

This award ceremony has had huge success over the past few decades and continues to highlight unusually humorous research or satirically criticise the events that go on in our world.

And as hilarious as this annual event is, Marc comments that there is another side to these prizes. He poses a question – “What is important, and what is not?“. If we are to spin the perspectives and remind ourselves (as the researchers). We are a voice of authority in the world of science, and we have a duty to inform the public what is important and real. What may seem trivial and unimportant to one, may be a game-changer for another. It’s all about perspective and how we deliver that message.

This can be applied to our own research. How you portray it makes a huge difference. As a simple task to the MRC DTP PhD students he asks us to:

The language we use, and where we place emphasis can change the narrative of what is important or not. While you have a think about that, here’s a shortlist of some of the Ig Nobel Highlights throughout the year (full list).

FLUID DYNAMICS PRIZE (2012): Rouslan Krechetnikov [USA, Russia, Canada] for studying the dynamics of liquid sloshing, to learn what happens when a person walks while carrying a cup of coffee (this prize inspired another).

FLUID DYNAMICS PRIZE (2017): Jiwon Han [South Korea, USA] for studying the dynamics of liquid sloshing, to learn what happens when a person walks backwards while carrying a cup of coffee. (live demonstration below @ UoM) 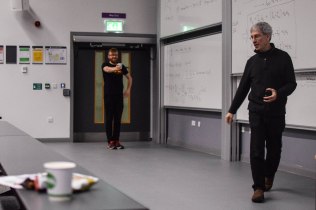 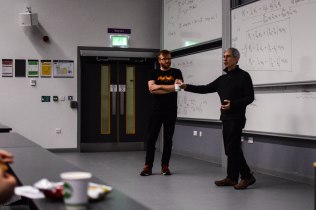 SAFETY ENGINEERING (1998): Troy Hurtubise [Canada] for developing, and personally testing a suit of armour that is impervious to grizzly bears.

PUBLIC HEALTH PRIZE (2009): Elena Bodnar [USA] for inventing a brasserie that, in an emergency, can be quickly converted into a pair of protective face masks, one for the brasserie wearer and one to be given to some needy bystander. 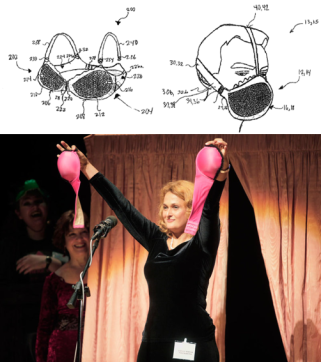 PHYSICS PRIZE (2007): Lakshminarayanan Mahadevan [USA] for studying how sheets become wrinkled in their series of publications: “Wrinkling of an elastic sheet under tension“, “Geometry and Physics of Wrinkling“, and “Elements of Draping“.

PEACES PRIZE (2013): Alexander Lukashenko, president of [Belarus], for making it illegal to applaud in public, AND to the Belarus State Police, for arresting a one-armed man for applauding.

MANAGED HEALTH CARE (1999): George and Charlotte Blonsky [USA] for inventing a device (US Patent #3,216,423) to aid women in giving birth – the woman is strapped onto a circular table, and the table is then rotated at high speed. 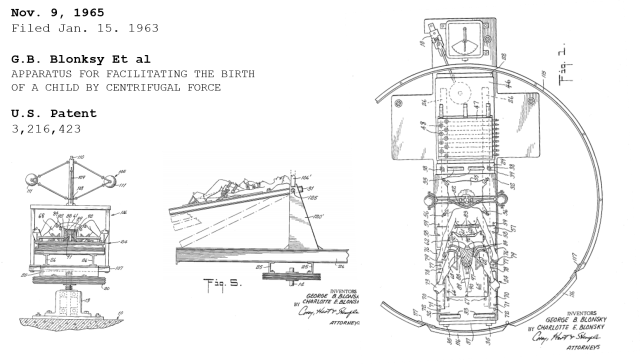 CHEMISTRY PRIZE (2018): Paula Romão [Portugal] for measuring the degree to which human saliva is a good cleaning agent for dirty surfaces. (it is). 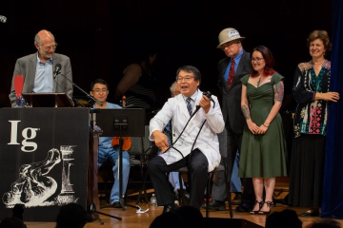 If you didn’t win a prize – and especially if you did – better luck next year!

[Tickets on sale in July from the Harvard Box Office]